Hello, I just installed Vikunja to try it out. Am using docker with a sqlite database. Noticed the following behavior after a fresh install (actually, after multiple fresh install attempts)

Could someone verify this behavior? This makes Vikunja very bothersome to use, because I have multiple lists, but Quick Adding to a particular list with #listname simply does not work.

That sounds like a bug. Could you check if you can verify this on try?

[Edit: After typing the post below, with plenty of screenshots, and hitting ‘Reply’, it told me that new users are allowed to add only one screenshot and up to two links. So I’m adding only one, and hoping that my descriptions for the others will suffice.]

There seem to be multiple bugs with try that make it impossible to test if this behavior is occurring.

From the Overview page, 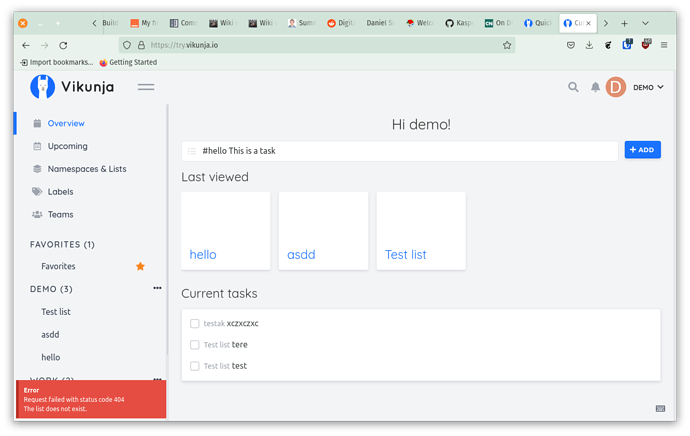 So basically, I have been unable to test in try whether adding a task with #listA correctly adds it to listA

That is intended behavior. If you’re on the list and create a new task which would disappear right after creating it (because you specified another list that’s not the current one) that would be pretty confusing.

At the moment, I tried testing out the fix in #1143 through https://1143-fixtask-create-list--vikunja-frontend-preview.netlify.app/ (connected to https://try.vikunja.io as the API) but there seemed to be no change in the behaviors mentioned so far. Maybe this is not the right way to test the fix?

Sometimes the preview deploys don’t work correctly, but they should work in general. I was able to verify adding a task “new task +test” from the home page correctly adds it to the test list (on the review deploy). I had to enable the quick add magic in the settings though.

I guess the error message could be improved?

Apologies for bugging you about this, but any idea when #1143 will be closed? Also, once it is closed, will you be pushing a new image to Docker Hub (which is where I’m installing Vikunja from). I’m eager to start using Vikunja

Apologies for bugging you about this

Also, once it is closed, will you be pushing a new image to Docker Hub (which is where I’m installing Vikunja from).

Yes, the CI will release a new image once the PR is merged.

@sagar The PR just got merged. The CI is quite busy right now but once this step passed there should be a new unstable release with the fix.

Hi, I think this issue still exists, or maybe its a variation of the error. I can’t seem to remove my preference for a default list, and thus the magic doesn’t add it to any list at all (whoops, thats not what happens. The magic adds it to the “removed” default list). No error is displayed, using v18.2 and v18.1 (front and backend)

There’s been a few improvements to this which are not yet released as a stable version. It looks like you are using the last stable release. Could you check this with the last unstable release or on try?

Aha, yeah you’re right, any idea how to move from stable to unstable while using docker? The image I’m using is served from vikunja/frontend and vikunkja/api.

Maybe its in the docs?

With docker, it should be enough to switch to the unstable tag on both containers.